The Circle Ensemble Theatre Company is dedicated to supporting new voices in the theatre with our New Plays Program. These productions are expensive, but we know for our art and our world to evolve, we must support artists from every generation. Please see our Donations page if you'd like to help bring fresh and relevant theatre to Athens. So far we have been able to produce the following new works: 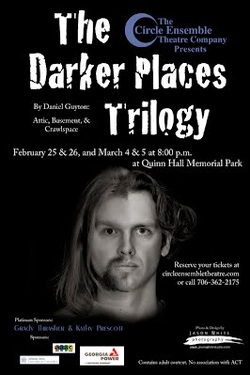 Our first foray into new plays was the World premiere production of Athens’ very own playwright Daniel Guyton’s new The Darker Places Trilogy. It is comprised of three one-acts, each taking place in a different room in a disturbed young man’s house and metaphorically, his body. The titles are Attic, Basement, and Crawlspace. This exciting new work performed February 25, 26 and March 4 & 5 at Quinn Hall at Memorial Park.

One year later Circle was invited to perform one act, Attic, at the first ever Atlanta Fringe Festival, expanding our reach into another metropolitan area. 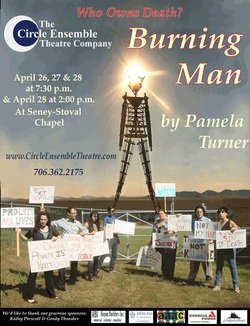 Once a year, tens of thousands of participants gather in Nevada's Black Rock Desert to create Black Rock City, dedicated to community, art, self-expression, and self-reliance. They depart one week later, having left no trace whatsoever. When this festival overlaps a sensational capital punishment case the day of the scheduled execution, all the players come together to dissect the various sides of the issue and attempt to come up with a justified solution for all.

Funny Valentine was a winner of the 2006 American Theatre Coalition Playwriting Competition. Burning Man was a semi-finalist for the 2006 PlayLabs at The Playwrights Center, Minneapolis, and the 2006 SheWRITES competition, Synchronicity Theatre, Atlanta. Male Man was a finalist for the 2004 Heideman Award (Humana Festival) and the Chester Horn Award (TheatreRats, NYC).

Pamela is the Artistic Director of multiShades·atlanta, the Atlanta Regional Representative for The Dramatists Guild of America, the Editor of ShowGuide magazine, and the Producer of PlayWorks 2000 for the Association of Theatre in Higher Education.

OUR HOPE: A CHURCH PLAY
conceived by Scotty Gannon; written and performed by members of Our Hope  MCC in Athens

Circle Ensemble professional actor, Scotty Gannon was inspired to create this production by his participation in Athens own Our Hope Metropolitan Community Church, an active congregation within the international fellowship of Metropolitan Community Church. Like all MCC churches around the world, Our Hope plays a vital role in addressing the spiritual needs of all people, but especially the lesbian, gay, bisexual, transgendered, and "straight-but-not-narrow" community.

Scotty thought the story of how church founder, Troy Perry, a licensed Baptist preacher, was inspired to begin this special outreach church needed to be shared. He developed a few scenes and then church members, facilitated by Circle Ensemble, created additional scenes, musical pieces and poetry about their experiences with MCC.


The Athens Welcome Center contacted Circle Ensemble to create a new, historically accurate, short play to be performed as part of their Holiday Spirits Tour. After meeting extensively with historians from the Ware-Lyndon House, Lisa and Joelle co-wrote a play based on the lives of some of the restored home's former occupants. They then went on to produce a delightful play performed right in the parlor of this beautiful home complete with historical furniture, costumes and props.